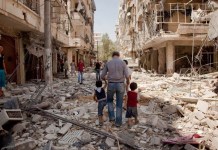 Jordanian Minister of Industry, Trade and Supply Yabar al-Qudah said that “global estimates indicate that the volume of construction projects in Iraq and Syria will reach about two trillion dollars over ten years.”
During the sponsorship of the dinner held by the Amman Chamber of Commerce for participants of the Arab-African and Gulf-Jordanian forums, the judges said that “these projects require Arab integration to participate and win the big share.” He pointed out that “Arab countries are facing an exceptional opportunity for Arab economic integration, The reconstruction of Iraq and Syria and the future of Yemen and Libya, which requires the development of plans and ideas are feasible on the ground. ”
“The loss of the opportunity for economic integration in terms of reconstruction projects will deprive the Arabs of participating in it or compete with the global economic march to achieve these great opportunities in the region,” the official Petra news agency quoted the judges as saying. He pointed out that “the volume of Arab trade with African countries is still at a low level as well as investment,” calling for “work to find real partnerships between the two sides either through industrial integration, the available materials on the African continent is a major base for industrial renaissance in the Arab world.”
“Jordan, which imports 96 percent of its energy needs and is one of the poorest countries in the world, today hosts large numbers of refugees, which make up 35 percent of the population, which poses great challenges to the national economy,” he said.

The commercial movement between Kurdistan and Iraqi provinces has been resumed