The emotional measures taken by the federal government in Baghdad against the Kurdistan Region against the background of the referendum on the people of Mosul, the newly liberated from terrorism, which imposed control of the local capital of Nineveh for three years after the withdrawal of security forces and the army in mid-2014.
A local source said that hundreds of trucks and tanks stand in long queues after covering the Peshmerga within the borders of Erbil province waiting for permission to enter Mosul.
The source said that the authorities prevent the entry of these trucks to Mosul by orders issued by the federal government in Baghdad.
The picture above shows the stretch of trucks for a few kilometers on the road between Arbil and Mosul. 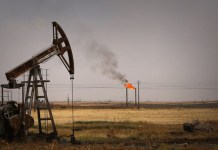